As you may know, Easter Camping is one of my favourite traditions. It is the annual gear-check and tarp-christening. It is the first, tentative excursion from your winter cocoon. If you live in the northwest, and like me, you don’t ski, you find yourself absolutely stir-crazy by spring. For me, every year, Easter is the rebirth of the lady camper. Shake out your sleeping bags, drag out your camping duds (you know, those cargo pants you save for trips like this), and bid a blissful adieu to your work/life/TV for a couple of days.

In 2012, I took my partner Jon camping with me at Easter. It turned out to be our last trip before I got pregnant. I did camp while pregnant, but it was not all that comfortable. I was also not able to eat and drink exactly what I wanted on my pregnant camping trips, so that was also a bit different… I have one or two posts up my sleeve about pregnant camping, so stay tuned.

Anyway, Easter 2102, Jon and I headed to Deception Pass State Park in Washington. It is a very scenic location, and on a sunny day, the views are incredible. It can be quite windy in the most exposed parts the park, so we used the incredibly efficient and well-organized reservation system to find a perfect site – sheltered, private, well-treed and away from the busier beach areas. 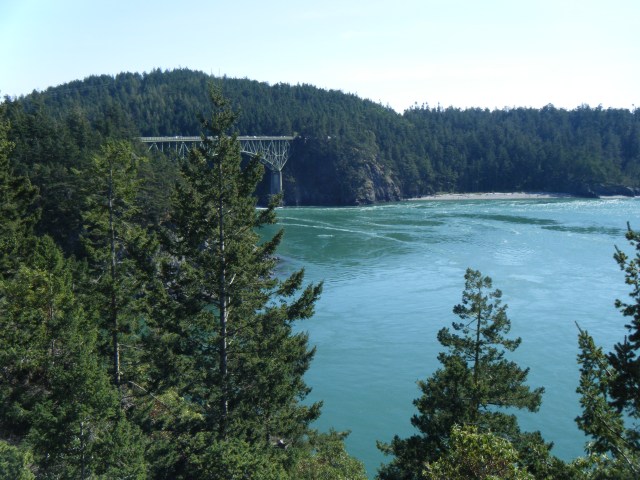 A view from the road of beautiful Deception Pass

A short walk to the beach and we were playing my favourite camping game – Rock Baseball. The rules are simple: find a suitable piece of driftwood to serve as a bat (this takes hours). Stand by the water, and get someone to throw rocks in your general direction. Swing away. Cheer wildly when your rocks flies.  Like “real” baseball, this game can last hours and requires snacks and cans of beer. Unlike other popular camping games, it requires neither brains (Cribbage) nor brawn (axe-throwing). Just an afternoon on an empty beach.

What is your favourite camping game?

Well… it has been a while since I updated the site, so I have been perusing my photo archives and deciding where to jump back in. As a starting place, I thought I should acquaint my readers with the tradition of Easter Camping (or Pesach Camping if you prefer, or just plain it’s-really-too-wet-in-the-Lower-Mainland-to-go-camping-what-are-we-thinking? camping).

Easter Camping is a group camping tradition started in 2009 to celebrate a friend’s early April birthday. After a successful 20-person excursion to a local island for a weekend of cooking, eating, campfire singlaongs and capture-the-flag, a legacy was started. This particular trip deserves its own post, so I will attempt to make that happen in the near future. For today though, I will focus on a somewhat more challenging trip at Easter the following year.

In 2010, a slightly smaller group of the same friends agreed to try a new location – Cat Lake, a small recreation site operated by the Ministry of Forests and a popular spot (in summer, at least) for ATVs, motor bikes, under-age drinking and general mayhem… The camping sites are heavily forested, and situated around a small lake with the occasional bear-bucket for securing food in trees and safely away from tents. Surely there is a better name for this than bear-bucket? … which I just made up. 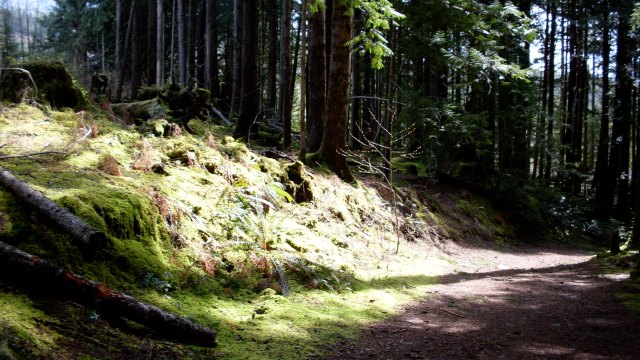 The site is beautiful, if you are into forests and moss and junk like that.

The elevation of Cat Lake (apparently only 300 m), combined with the time of year (early April), makes for a unreliable weather. With steady rain for most of the long weekend, I was prepared to bundle up and crouch near a fire for hours on end. What I may not have been prepared for was the fact that we were camping pretty much right at the freezing line, so a few steps uphill from our tents, the rain was coming down in snow form. FUN! Digging drainage trenches around your tent in the middle of the night has always been a hazard of west coast camping, but doing at it zero degrees is a special treat. 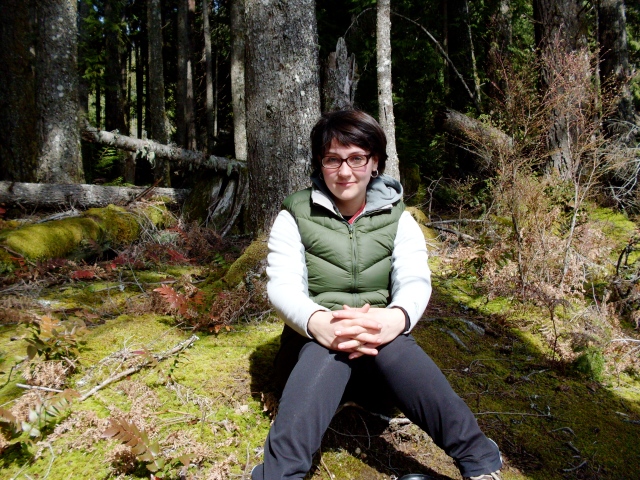 The sun is out! Oooh, don’t I look SO HAPPY.

But I must take a moment here to talk about what was decidedly the worst part of this particular trip. It may come off as a rant, but it may also have also formed a cornerstone of my good camping practice since this trip. Here’s the jist of it: low-ceilinged tarps around campfires do not happy campers make. Let me explain. When it is raining and/or snowing outside, and the sun sets at some ungodly early hour, and your entertainment for the evening includes Tom with a guitar (only ONE guitar and HE’S NOT SHARING), and a generous supply of boxed wine… you had better be comfortable. This means spending a fairly serious amount of setup time on the positioning and angles of the tarps under which you will find yourself for the next, oh, 72 hours. Because once they are up, NOBODY is going to entertain your suggestions to improve the design. Believe me.

So, what’s a camper to do when her man-friends have rigged the entire campfire area in such a way that the fire itself (which is safely within a chimney/ventilation opening area) is surrounded by extremely low-hanging tarps? What if said tarps are muddy (like, on the bottom side)? What if the airflow from the (extremely smoky) fire has created a veritable smokehouse in the seating area? Well, the sensible thing to do would be to catch some Rainbow Trout and actually smoke them, and sleep in your car. Yes? No. Sadly, it is well-established that Tom can’t catch fish. So. There you are. 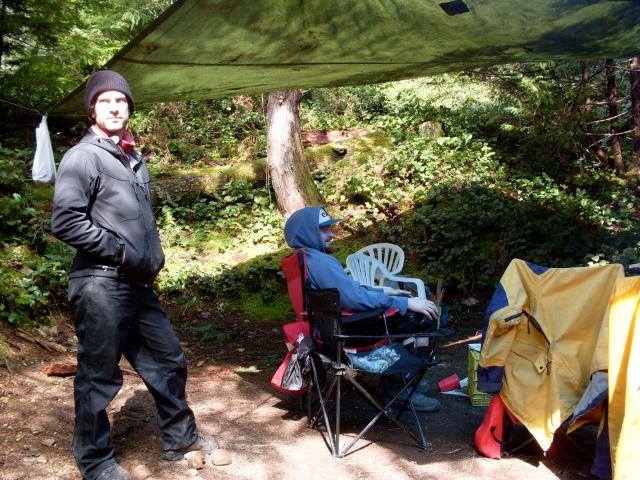 Feast your eyes on this hunk, who is demonstrating the low-ceiling conundrum, and who sensibly slept in his car for the weekend.

But let us return for a moment to the muddy undersides of the tarps. Sure, occasionally tarps need to be laid out on the ground for placement and measuring. I concede. However, tarps that also have holes in them then turn into mud colanders, and inevitably drip freezing mud on you incesantly. This makes for a never-ending game of musical chairs in which you are the only player and your chair is the only chair. If you are lucky you will kick over a few bottles and step in the fire at least once over the course of this game.

The other hazard is the toque-on-tarp hazard. Low tarps mean you have to bend and duck to get under them, and can’t strecth your legs completely without getting out from under cover. And as anyone who camps in BC will know, the toque is a full-time game, especially in April.  So if your toque becomes an upside-down swiffer sweeper for your muddy tarp-roof, you will end the weekend with a muddy toque and a clean tarp, not to mention an aching back. And wet clothes that have completely absorbed all that the smoke-house had to offer. Which is what happened to us. Luckily, we were able to dull the pain while Tom played guitar. Play on, Tom.

Heed this cautionary tale, friends. Make sure your tarps are clean and have no holes. Bring duct tape for emergency repairs. Lady Campers: if you don’t know how to erect good-quality shelter, learn. Practice. Ask for advice. Don’t assume that men can do it all correctly. Your shelter is sacred in April.

This would be the end of the story, but no retelling is complete without a shout out to two friends who didn’t stay the whole weekend. Genny was 8 1/2 months pregnant when we ventured out, and her husband was in a full leg cast, recovering from a serious injury, and using crutches. These two bravely waddled and hobbled past the gate (that is apparently locked during the night) and down the dirt path from the parking lot. Perhaps one or two of us worried that we may be delivering a baby this weekend. Genny had this thought herself before too long and they turned back to Vancouver before we had to test our midwifery skills. Good call Genny. No one wanted to swaddle the babe in muddy tarps and smoky sweaters.